In one of our projects, the evaluation of Community Solutions for Health Equity, or CSHE, one of the grantees, the Refugee Community Partnership in North Carolina, is specifically focused on language justice in the healthcare system.  We have felt inspired by this framing — language access not just as an accommodation, but as a right.

At a recent event, we co-presented to a group that included people who would need language accommodations for English-language presentations and others who would need accommodations for Spanish-language presentations. We were inspired by the idea of language justice to make the presentation into a truly bilingual space, accessible and friendly to English speakers, Spanish speakers, and speakers of both languages. We attempted to make the presentation as natural and conversational as possible, minimizing a sense that either language was “primary” or “secondary”.

The session was SO exciting and energizing, and speakers of both languages gave us positive feedback about the experience. Both of us were on the evaluation team for this project and are bilingual in English/Spanish, so we had knowledge of the items being presented and could easily transition between both languages. We had the ability to implement different strategies to ensure true language integration:

One of our biggest takeaways was that a bilingual meeting is indeed possible and wonderful!  Other lessons included: 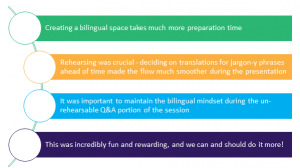 In considering where else we could implement these strategies for bilingual meetings, some ideas came to mind. In our evaluation and research work, we have been trying to be more intentional about our engagement with communities as well as thinking about how to tailor our dissemination efforts to different audiences. Being able to have more linguistically inclusive strategies, such as having bilingual Spanish/English meetings and presentations, and maybe other languages in the future, could help us make our research and evaluation more accessible and useful to the communities we serve.