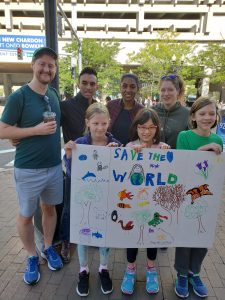 Why do so many African American children in Raleigh, North Carolina experience difficult-to-control asthma, resistant to standard asthma therapies?  Why are more people being displaced by natural disasters than they used to be? And why would water be unsafe to drink in some places? Unfortunately, these questions are not just trivia, but rather point to a number of ways the environment intersects with social determinants of health.

Members of the ICH staff are joining the youth-led Global Climate Strike today, Friday September 20. We know that the health of our planet’s environment, both locally and globally, is inextricably tied to the health of our communities. Environmental damage and climate change make people sick. Supporting environmental causes is centrally aligned with ICH’s vision and mission.

Let us explain. Social determinants of health (SDOH) are “the complex, integrated, and overlapping social structures and economic systems that are responsible for most health inequity” (source: CDC). These things range from the number of bus routes a neighborhood has, to the academic rigor of schools, to having access to a primary care physician who knows your name and medical history. The US government recognizes five key areas of social determinants of health:

The environments in which people live are a key part of SDOH, and have extensive implications for people’s overall health and quality of life. For example, certain low-income neighborhoods of NC have above-average ground ozone levels, and even slight increases in ground ozone levels are associated with changes in lung function. In other words, children who live in certain areas are at a health disadvantage, simply because of where they play outside, wait for the bus, or go to sleep at night.

Looking more broadly, weather-related natural disasters like storms, flooding, wildfires and droughts are made more frequent and more severe by climate change. These disasters caused 24 million people to be displaced from their homes in 2016 alone. This displacement wreaks havoc on people’s economic stability, in addition to their social and community stability.

Other ways that environmental damage does harm to community health include:

Public health has made incredible progress in the past century. But our gains in human health and wellbeing could be reversed if climate change is allowed to progress.  This is why ICH supports the Global Climate Strike and other efforts to draw attention to and address climate change.