The first population census of the United States was conducted back in 1790 when the population was just under 4 million.  The US Census Bureau has come a long way since those early days, yet the images that come to mind are still probably pretty archaic — data enumerators going from door to door with pencils and clip boards and maybe even on horseback in the early years!  Well today the Bureau works like a well-oiled machine, coordinating a monthly data collection of 250,000 households via mailed questionnaires, computer assisted telephone interviews, and in-person interviews.  This data (called the American Community Survey or ACS) is combined to give us very detailed estimates each year of who is living in the US.  In contrast, the decennial census (conducted every 10 years) collects only basic information on gender, race/ethnicity, household composition, and housing tenure.

Recent news that the US House of Representative voted to cut funding for the ACS (and the Economic Census) may lead you to conclude that the data from such surveys cannot be that informative or useful.  However, nothing can be further from the truth, particularly for those of us working with communities and public health-related programs at the local level!  US Census Bureau Director, Robert M. Groves, does a wonderful job explaining the impact of the proposed defunding in his Director’s Blog.  Here we hope to highlight several examples of how the Institute for Community Health has used data from the American Community Survey to support the work of our community partners and further research into the health of local populations.

One nearly universal topic of interest is poverty.  The ACS is one of the primary sources for poverty data and we work on this topic frequently.  Recently, ICH pulled together a presentation for the Community Affairs Department of Cambridge Health Alliance that included the proportion of individuals living below the poverty line in Cambridge, Chelsea, Everett, Revere, and Somerville, MA.  We paired the data with information that ICH had collected on the weight status of adults in these cities and were able to illustrate a relationship between poverty and obesity at the population level.  The data provided a catalyst for the Community Affairs group to begin discussions related to food justice within their service communities.
Census data is also an integral part of our work as evaluators of public health programs.  The Massachusetts Alliance on Teen Pregnancy’s Youth First Initiative is currently testing community-wide approaches to reducing teen pregnancy in Springfield and Holyoke, MA.

As evaluators of their efforts, ICH has pulled data from the ACS to determine the number and proportion of teens residing in each city by census tract.  This data will be mapped and overlaid with the locations of the community health centers that have partnered with MATP on the project.  This information will provide Youth First with invaluable information on where the at-risk population resides within the community and how well the clinical providers are geographically positioned to serve the target population.   Such information can help a program evaluate and target their efforts, use resources more efficiently, and achieve a greater impact on a community’s health. 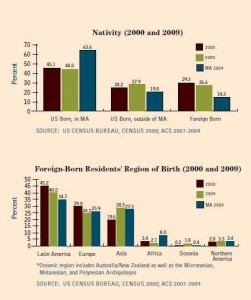 Finally, we frequently use census data to more generally describe a community’s population and its changes over time.  ICH supported the data efforts of the “Well Being of Somerville Report 2011” which was released last fall by the Somerville Health Agenda at Cambridge Health Alliance.  Using census data, we were able to describe the current population of Somerville, MA and show how the population’s characteristics have changed over the past decade.  Indicators including age, race/ethnicity, poverty, housing, language, country of origin, income, and educational attainment were all obtained from the US Census and ACS for Somerville.  And importantly, these indicators are all considered ‘determinants of health’ or factors in peoples lives that can affect one’s health in positive and/or negative ways.  Collecting these types of data and examining them alongside other types or sources of data yield great insight into the assets a community possesses as well as the challenges it may face from a public health perspective.  Overall, the this report is currently serving as a tool for local leaders and stakeholders to determine the public health needs of Somerville and inspire future planning efforts in the city.

We hope you’ve been impressed by how integral the data from the US Census Bureau is to what we do to improve health.  Our community partners rely on these data to inform their efforts — whether spurring new conversations, planning and targeting programmatic activities, or generally assessing the characteristics of a community.  There simply is no substitute for the American Community Survey.   And the most amazing part?   The data are there, right now, available online to anyone who is interested in learning about their own community.  Check it out!

The views expressed on the Institute for Community Health blog page are solely those of the blog post author(s), and do not necessarily reflect the views of ICH, the author’s employer or other organizations with which the author is associated.